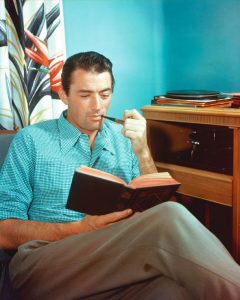 After Merilyn’s “Quarantine”, it’s time for a gentleman to inspire us during the quarantine days that are still on.

So I asked another gentleman, Christos Markogiannakis to think of how Gregory Peck would be today during his isolation at home.

This is how he imagined it:

He would have seen the Omen of this coming pandemic, would have cancelled his Roman Holiday and then Killed a Mockingbird – as a sacrifice – to prevent it…in vain!

From a female perspective and through my imagination,  he would’ve played a record by Ray Charles , enjoy his scrambled eggs with a slice of bacon on the side, and then he would most certainly get bored. This is when he would use ironing as an excuse to invite his co- star Ingrid Bergman to join him and be certain she on the other hand would sure know how to Put a Spell on him.

By the end of the day he would enjoy a glass of Guiness, something he enjoys on a daily basis, and smoke his pipe while dressed in style the best way he knows.

An international best dressed awarded in the Hall of Fame can never be wrong, even in Quarantine.

Written By
Andronikki
More from Andronikki
Warner, Universal and Dirty Hit are among the labels joining the movement...
Read More