In terms of menswear there are two main tailoring schools one should be aware of, Italian and English, both schools feature many-well known houses and showrooms that have established their presence through an impeccable history of hard work since the beginning of tailored time.

Additionally, there are few people whose creativity is influenced by both of these cultures; and even fewer, successfully. 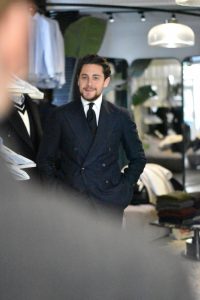 Alex Pirounis is an exceptional example of someone that contributes to this category. Born in London, he got a taste of the English tailoring world from a very young age and with his Italian-Greek roots, it only makes sense that such a fusion could result in such a successful convergence of both worlds. He is an intellectual that knows what the English culture, the Italian finesse and the Greek temperament can offer to either tailoring backgrounds and the fashion industry, globally.

Alex stands among some of the greatest success stories that, even now in his 30s, he has not changed his style much over the years; but instead, he has brewed it and made it better, like a fine wine that needs time and patience to offer you its rich taste.

As a kid, suits were his main uniform and growing up, suits were the attire that he grew to love and respect. One other important checkpoint of experience alongside his upbringing includes his long journey into menswear craftsmanship which has led him into becoming one of the world’s new generation of wardrobing specialists.

His latest project, Anglo- Italian, along with his “partner-in-crime” Jake Grantham, may only be almost 3 years into its formation, but the brand has established their presence in the industry capturing the attention of thousands of people that have been influenced by their vision as is apparent via their social media channels. Featuring content such as candid shots from Pitti Uomo, and street-style photography and imagery that highlights what Anglo-Italian represents, showcasing their perspective on how they believe gentlemen should dress today: effortless, sharp, clean and as cool as it gets; just like Alessandro himself.

Join our delightful meet at the Langham Hotel where we enjoyed a great glass of rum and a dialogue about style; refined and absorbed, mirroring the atmosphere Alex inevitably seems to drag around with him.

*Andronikki Suggests: Anglo-Italian Tessutti which is their own collection of cloth, woven in England & Italy, available to buy as cut length online or to commission as a custom garment in-store.

It seems that Alex has visioned to build an empire and the “construction” of the kingdom has already begun.

Written By
Andronikki
More from Andronikki
Every weekend is dedicated to world’s music and to people...
Read More