My last trip in Italy was a blast!
I did not expect I would have the opportunity to meet one of the great female role models in mens world..
The women in mens fashion are not many but those who have managed to establish themselves, have influenced the world globally. 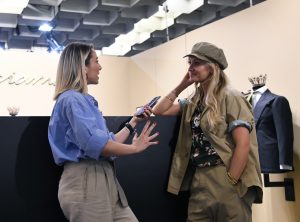 Sarah Ann Murray – former Fashion Editor in The Rake – is a respectable woman in menswear, a freelance fashion stylist, and sartorial wear and luxury specialist.
She has worked with some of the most famous elegant men in the world and she was one out of 6 people that Lanificio f.lli Cerruti included her on their Six for Six project, introduced in Pitti96. 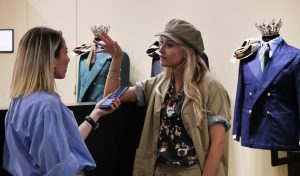 I was lucky enough to spend a few minutes with her and I realised that this amount of time was adequate to understand her character, her personality her brilliant mind.

Sarah is an inspiration for many of women involved in the fashion world and if I can add, an inspiration for myself as her work set the gears in motion to create this website and a motivation to continue.
Therefore I would like to invite all of you to join me and Sarah in our conversation which can be found in the link below.
After all what we all support through this page is that it is a man’s world but it would be nothing without a “Sarah’s touch.”

Listen to my 2nd episode at www.andronikki.com where Sarah explains how women can survive in a Man’s world and how she became such a recognised and a respectful person in menswear.

Written By
Andronikki
More from Andronikki
Another week is coming up to bring more interesting people who will...
Read More